He is known to be the best and most successful Filipino Industrialist of his time.  Let’s all know more about this very charming,  media shy tycoon of the Philippines. 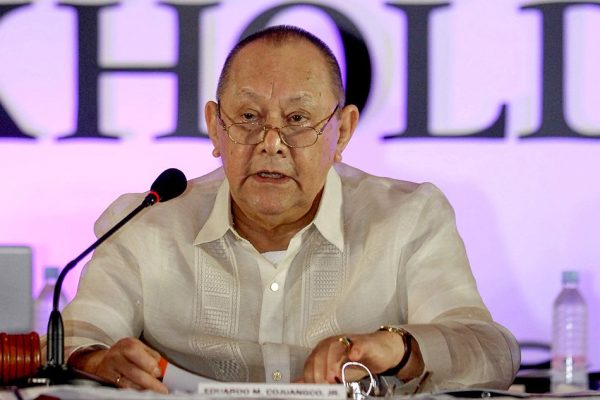 Danding Cojuangco was born June 10, 1935 and is the eldest son of Eduadro Cojuangco Sr. and Josephine Murphy. His mother is an Irish by blood, she is a daughter of a U.S. Army volunteer, born and raised in Baguio City. Danding was born in raised in their farmland in Paniqui Tarlac. He grew up like any other normal kids, walking around the streets of their small town. He belong to a family of landlords but unlike the normal greedy landlord stories we know, his father is a kind landlord, he is very well loved by the people around him. His dad was then the Governor of Tarlac who refuses to get ally with the Japanese. At the age of 49, Eduardo Cojuangco Sr. died of kidney failure in year 1952. This made Danding Cojuangco study Field crops and agriculture in the University of the Philippines to be able to understand the work around of his father’s estate. Upon taking over his father’s debt-ridden logging business, he decided to sell the company.

Danding’s education is one of his life’s early struggles. He couldn’t get a solid education foundation, even during his freshmen as a high school student, Danding still have difficulty in reading. The school administrations  even advise her mom to get him a tutor to focus on teaching him what he is left out from school.

Danding was married to Soledad Gretchen Oppen and blessed with four children, Tina, Lisa, Charlie and Mark.  Danding can speak Fluent English, Tagalog, Kapampangan and Ilokano which are the native language of Tarlac his hometown.

Danding invested what is left with the proceeds of selling his father’s business in cement production named Northern Cement Corporation.  This company has withstand many struggles up to this day which is still doing very well in the market. As this company marks his very first venture,  he is closely managing it upto this time even if he already retired from business.

Cojuangco purchased 20% of San Miguel Corporation amounting to 488.28 Million pesos or 16.276 million shares at 30 pesos per share rate. Within that very same year, he purchased another 31% of San Miguel corporation which is 33.13 million shares. Allegations arises stating that his purchase of the SMC was a scheme of his money laundering way of covering up the ill gotten wealth from the Marcos’s but later, by year 2011, the Supreme Court finally ruled out that Danding’s formerly sequestered stocks in SMC were not ill-gotten.

His year sales profit of Php6.6 Billion grew to Php536 Billion per year. By year 2013 Cojuangco decided to sell his stake on San Miguel Corporation to Ramon Ang but Cojuangco remains as the CEO of the company.

There has been a lot of business venture done by Danding which includes banking industry, food and beverage manufacturing, oil manufacturing company

Danding Cojuangco served his hometown as a Governor from 1967 to 1969 and served as a Congressman from 1969 to 1972. His public service focused on the agricultural projects he implemented for his hometown. Not everybody know but Danding Cojuangco is a farmer at heart. He lso became prominent as a Marcos crony during the golden era of the late President Ferdinand Marcos.  He served as an adviser and a close friend to the Marcos’s which later creates conflict with him and cousin Corazon Aquino. He is the current chairman emeritus of the Political Party Nationalist Peoples coalition which he founded 1992 which he utilized during his presidential campaign back in year 1992. Fidelity V. Ramon won the election which both Cojuangco and late Senator Miriam Santiago who also run for the presidency that year contested the result.  They both agree on the allegation of massive election cheating conducted by Fidelity V.  Ramos in order to win the presidential election.  Cojuangco’s main purpose in running is to continue the development and progress of the nation.

Cojuangco got exiled with the late President Ferdinand Marcos year 1986 and was only able to come home year 1989. Cojuangco would always say that blood is ticker than water and that no matter what happens he will always be Cory Aquino’s cousin.  In retrospect,  Danding is also thankful of the friendship he and President Marcos has, he belong to the group “Rolex 12” who are the acknowledged closest friends of President Marcos. He said that he is not a crony,  he was a real friend for him that he honored until the very end.

“It is important that God loves you.”

Danding never stopped conducting charitable works for the less fortunate people in many different ways. His immerse effort to help the community and the less privilege people has made him closer to God. He keep his family relationship closed to God as well as he obtain that trait from his late mother’s faith in God.

Danding didn’t finish his college study due to the early passing of his father, he has to take up vocational course in order to step in to what his father does to continue their lives. You cannot learn everything inside the classroom, the most important lessons in life are being taught to us by life in our day to day living.

This doesn’t mean Cojuangco is promoting undergraduates to pursue business instead of finishing it. In fact, he himself regret not finishing his college degree. He is a strong believer of solid education foundation, which can provide you better opportunity in doing business. Having a strong education foundation can also equip you with the proper knowledge in reducing the risk in the business venture.

As a support,  Cojuangco has been sending scholars of business to school in hope for better tomorrow.  He aims to alleviate poverty by equipping the youth of today and giving them chance not to be an employee for anybody but be the boss of their own.

“Be pragmatic about things. Have perseverance. Have strong faith in what you believe in.”

In all that Danding achieve, he can proudly say, he work hard for all of it. When his father died, they almost bound to loose everything if not with Danding’s perseverance in business. His business career has gone so many challenges but was able to overcome them one day at a time.  Cojuangco admitted that with all his achievements he could have not gain them without the help of those people around him who believe in his vision and purpose.

Previous post
How to Start A Poultry Business in the Philippines

Next post
How to Start a Bakery Business in the Philippines