The Indonesia chain of convenience store-Alfamart had hit the shores of Philippines, through their joint partnership with SM Investment, and for those who are interested in investing with this foreign company and ride the demand for convenience store chains, read further and find out the possibility of franchising with Alfamart.

Alfamart is one of the leading chains of convenience stores in Indonesia consisting of over 10,000 branches across Southeast Asia. The company was first established in December of 1989, by Djoko Susanto together with a trading company in Jakarta.

The Joint of Alfamart and SM Investments

Alfamart and SM Investments formed a partnership which helped the Indonesia company penetrate through the Philippine market. During its initial launching, Alfamart can only be seen on densely populated areas in the Philippines, particularly around Metro Manila.

However recently, Alfamart and SM are trying to establish as much of the convenience store as possible. Today Alfamart can be seen everywhere, both on urban and rural areas, commercial or residential, an Alfamart can be spotted. 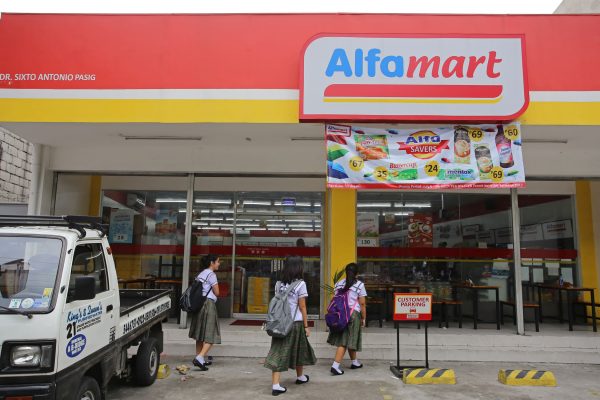 The Possibility of Alfamart Franchise

While Alfamart is a plausible franchise in Indonesia, there is no news regarding the franchising opportunities available in the Philippine market yet. Nevertheless, if there’s a chance that Alfamart and SM Investments open its doors for franchising Alfamart, the following are the three packages Alfamart offers.

As a point of reference, below is the exchange rate of Indonesian Rupiah to Philippine pesos as of writing this article. Do take note, that as the average store requirement in the Philippines is bigger-the franchise fee and total cost of the investment may increase.

This link can also serve as a contact form for the SM Investments Corp.

The following are the possible benefits future franchisees can receive by investing on an Alfamart convenience store.

Alfamart is an international acclaimed company, with a business system, tested through various location and environment. Which guarantee that the franchisees will be operating under a management and operation system which are both harnessed by decades of being in business and experience of thriving to other countries.

The other benefit of franchising Alfamart in the Philippines is their partnership with SM. SM the most well-known tradename in the Philippines, receiving the support of a huge company, gives the owners of the franchisee leverage.Is Alfamart Worth the Investment?

Alfamart had years of experience in the business, and continues to thrive on its field, franchising it on the Philippine may also yield great benefits as it is backed up with a powerhouse company like SM.

However, there is no assurance that Alfamart franchise will be made available locally, and if it does, there’s a possibility that total cost of investment for a Philippine branch will require a greater number of resource investment that its Indonesia counterparts.

Previous post
About Bentelog Franchise: Fees, Inclusion and Other Details

Next post
Top 10 Blue Chip Companies In The Philippines