How to Franchise: Bagnetified! Restaurant

The taste of bagnet is just phenomenal, who would have thought that you could use bagnet in a dish or even as a main course? Only the bright Filipino minds can, of course! Bagnetified! The Filipino restaurant that served bagnet in sinigang, kare-kare, papaitan, dinuguan and other well-loved Pinoy dishes.

You could see Bagnetified in SM supermalls and other crowded places in the country.

A Word of Caution

iFranchise.ph received numerous complaints about Bagnetified! not earning for its investors for years. Here is one of the posts. 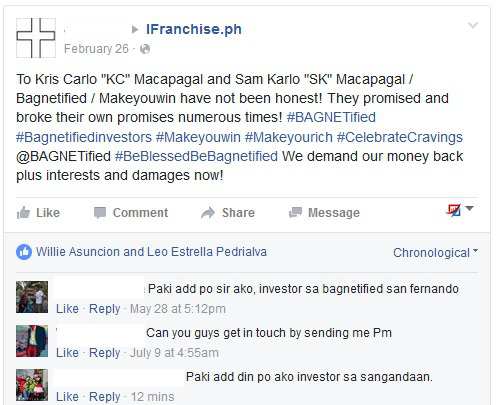 Please do your due diligence before investing with any business. Be careful!

MakeYouRich Inc is the company that stands as the owner and founder of Bagnetified. MakeYouRich Inc has been in the franchising business for eight years already. KC Macapagal, the President of MakeYouRich Inc was part of the 50 Inspiring Young Entrepreneurs which are published in Go Negosyo book and he was also awarded as Best in Franchising Support in Entrepreneur Magazine. He started an ink refilling station, Ink and Prints which made him known in the business industry at a tender age of 24, way back last 2006. His company also has other active franchises that can be seen in SM malls such as the Inviguards which sells screen protectors with a lifetime warranty. Make You Rich Inc. also has a franchising consulting and training center.

Bagnetified has branches in Shaw Boulevard (premiere store), Pasig City, Imus, Cavite and even in SM malls such as in Manila, Bacoor, Calamba, North Edsa and Fairview. 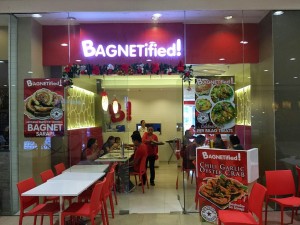 Bagnetified’s franchise deal is indeed one of a kind because it is the only franchise deal in the country or probably in the world with a franchise guarantee. Yes, you can have your money back if you are not satisfied.

The franchisee and Make You Rich Inc’s deal is part ownership. The agreement states that the franchisee can own a franchise for as low as 2% of the amount of the store, more or less equivalent to P150,000. With a promise of a return on investment as early as 6 months, plus they would manage the store from construction, to the hiring of the staff and up to overall finishings. If you would look at the deal closely, it’s more of a laid back partnership on the part of the franchisee. No more hassles in finding the perfect location because, Bagnetified are mostly inside the biggest malls like SM. The franchise agreement is really provocative and tempting indeed!

What are the highlights of the Bagnetified franchise deal?

How Does Part Ownership of Bagnetified work?

The company has boasted that most of their restaurant stores in the SM malls sell around 5M to 30M a month. They have added that their branch in SM Fairview has a daily sale of P50,000 to 60,000!

To break it down, with a sample estimate of 3M sales:

What Are the Franchising Requirements?

You may look for Sam Macapagal or any franchise specialist available to enlighten you on the franchise deal of Bagnetified.

How to get a Franchise Ownership?

First, you need to sign a memorandum and franchise agreement. This will be on your name as the franchisee and as required by the major malls such as SM where the stores are usually at.   And if for any reason, you have decided to discontinue with the contract, you will have your franchise fee amounting to P400,000 as the base amount then multiplied with your ownership percentage (example: if you own 4% then you’ll get your P16,000) with no questions asked.

To reserve a slot and to know more information, you may reach Bagnetified through the following contact details:


6 responses to “How to Franchise: Bagnetified! Restaurant”