How to Franchise the Famous Belgian Waffles Food Cart

Have you tried the most sought after snack lately? It is freshly baked, crispy and on the outside and yet soft in the inside with various fillings to choose from? If you have guessed waffles, then you got it right! The Famous Belgian Waffles is taking the food and snack cart industry by storm. You can see it in every crowded place, from train stations, school fairs, and even at the supermalls. It was indeed a huge hit even when it just started. People would be willing to wait on queue just to taste this waffle sandwich. The Famous Belgian waffles come in several filings to choose from such as peanut butter, hazelnut, chocolate, blueberry, banana chocolate cream cheese and ham and cheddar. They have won the hearts of many by delighting their customers with their pleasant products which are of high quality at a very affordable price.

About The Famous Belgian Waffles 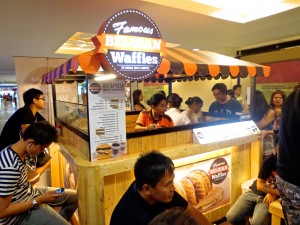 Innovention Food Asia Co is the proud operator and owner of The Famous Belgian Waffles. This company has developed this versatile snack and went all the way up into the food cart franchising business last 2012.

The Famous Belgian Waffles has pioneered the waffle sandwich in the country which uses premium fillings like cream cheese, strawberry marmalade, hazelnut, blueberry, chocolate and more at a very consumer friendly price.

Despite its given name, The Famous Belgian Waffles have captured the Filipino taste buds, not only of the young people but of all ages. For as low as Php 35, the general mass can get to enjoy this scrumptious and delectable snack and for the price of Php 55, an avid patron can avail of the premium flavored waffle, what more can the consumers ask for?

It started with only few branches and now it has over 120 branches nationwide. Even while it was only starting, supermalls in the country like SM of almost all branches already took part and grabbed the opportunity to avail of The Famous Belgian Waffles food cart because they have the gut feeling that this is the next best thing in the food cart industry. And they were correct; people have always patiently queued on long lines just to get a taste of this soft and fulfilling snack.

The capital investment starts from Php 380,000 and the term of franchise is for three years. You can choose from a food and waffle sandwich kiosk, counter or food cart design.

If you would franchise The Famous Belgian Waffles, you would be charged with 3% for the marketing and advertising fee. There is a renewal fee of Php 50,000 every three years.

For franchising inquiries, you may reach Innovention Food Asia Co. through the following contact details:

Franchising is indeed one of the latest craze in the business world. Many novice entrepreneurs avail of such because since the brand is already known to the public, marketing it would not be bothersome anymore. And if you are looking for a food cart franchise that is well rounded that mean it could cater almost anyone, given at any time of the day, then why not try The Famous Belgian Waffles. Give it a go and see how it could change your income stream for the better.