From Moshi Manju’s earliest records on their official Facebook page, the store might be operational during December 3, 2013, and has continuously spread their branches nationwide. Selling affordable pieces of mini cakes filled with 2 variations of delectable fillings namely choco fudge and pastillas de leche.

What is a Manju?

For those who are unfamiliar with manju, a manju is one of the wildly popular Japanese confectionaries in Japan. It’s one of the most common sweet, available both on street vendors and diners.

Manju is originally from China and is called Mantou- Chinese have derived the recipe for their mantou from a type of pounded rice cake.

It was when a Japanese envoy brought back mantou from China in 1341 and started selling it as Nara-Manju, and became rumored earliest record which started the distribution of Manju in Japan, and also the reason of its name today.

What is Manju Made of?

The basic recipe of Manju is made from a sticky dough, consisting of either flour, rice flour, or buckwheat, while it’s filling is traditionally made with red bean paste, recently Manju fillings are started to become diverse, giving birth to countless options to the mass. 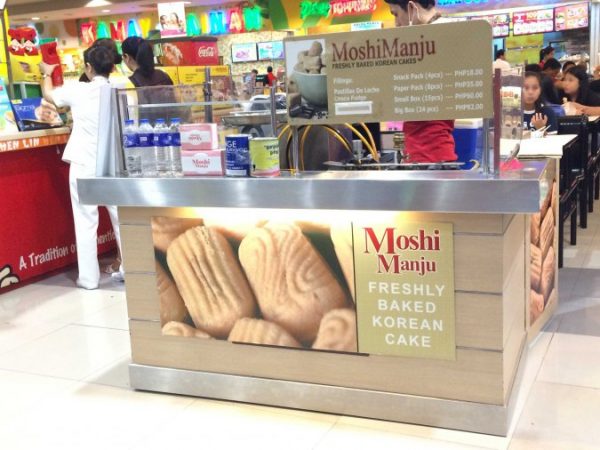 As per mentioned earlier, Moshi Manju comes in two (2) flavors, the pastillas de leche & choco fudge. It’s said that the snack pack cost 18 while the paper pack cost 35, and if divided, makes each pieces of Moshi Manju less than 5, making it an affordable quick snack or dessert.

The possibility of Moshi Manju Franchise

While Moshi Manju seems a fairly new established product concept, it’s no wonder that upon checking their official Facebook page, that many are inquiring regarding the possibility of franchising with them.

However, upon contact Moshi Manju, the company stated that the company is currently not open for franchising, which could mean that partnering with Moshi Manju in the future is not entirely impossible.

To get receive more updates and the newest information about Moshi Manju, you may refer to the contact details stated below.

While there are limited information regarding both the contact details and the company’s background, people who are interested with company are advised to directly visit some of their sites around the metro to know more about Moshi Manju

If you’re interested with franchising Moshi Manju and are waiting for them to open opportunities to interested investors, take note that the store had been open since 2013, but never show signs of branching out to franchising.

If you’re interested in the product concept, then an alternative option is learning how to make Manju as a way to jumpstart your own Manju business.

Next post
Top 6 Civil Engineering Companies in the Philippines