When hunger strikes in, it’s nice to fulfill it through a delicious snack that will make your mouth happy even up to the last bite.   Siomai has been one of the favorite snacks of Pinoys and since then it has even evolved as a dish partnered with rice and noodles. No wonder you would get to see food carts of varying sizes all over the Metro and even outside with Siomai as one of the most sought after. Siomai or Chinese dumplings are mostly served steamed but nowadays you may also see it served fried. It is usually made of pork, beef, shrimp, sharksfin, combination of one or two wrapped in a delectable wonton wrapper. On top of that it is best served with soy sauce and calamansi or chili garlic sauce.

If you wish to come up with your very own food cart business and you wish to have siomai as your main product of choice but is on a tight budget then we have just the right food cart for you. With only a small capital to spare, you can have your very own Emperor Siomai food cart.

Emperor Siomai is one of the best-selling food cart concepts of Pinoy Pao Express Inc which is formerly known as Filtrepreneur Franchise, Inc. (FFI). It has been known to most Pinoys that Filtrepreneur Franchise Inc has soared high since 2006 in terms of expanding its reach in the food cart industry. As the name suggests Filtrepreneur which is short for Filipino entrepreneur, it aims and envisions itself as a medium in stirring the entrepreneurial spirit among the Filipinos by generating more jobs and helping the ailing economy of our country through the business ventures that it offers.

What is the Franchise Fee of an Emperor Siomai Food Cart Franchise and What are Included? 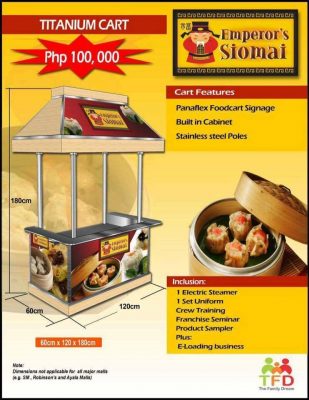 With its vision which is to be recognized and respected as the most successful franchise network marketing company in the Philippines. PPEI has continuously grown and developed each Filipino who aspires to become a successful entrepreneur. With a starting capital of as low as Php100,000 you can now have your very own food cart business.

Emperor Siomai, being one of the best sellers, offers an interesting food cart franchise package which includes the following:

What Makes Emperor Siomai one of a Kind?

Emperor Siomai has a wide variety of flavors to choose from. Your customers will surely keep on coming back for more.

The following product list is available for Emperor Siomai:

PPEi is known for their quality products since 1992 because it started off as a factory which is a supplier of siomai, siopao, fishballs and kikiam to the market. Its factory was then located at Sangandaan, Quezon City and was formerly known as Red Cricket Vending Concepts Inc.

In terms of being the cream of the crop in the food cart franchise industry, it has gained its recognition and distinction in various award giving bodies:

How to Franchise Emperor Siomai?

Step 2: Choose your preferred food cart theme, furnish a letter of intent and fill out the franchise application form and once done you need to hand them out and proceed to step 3.

Step 3: Draw a sketch of your chosen target location. After it has been approved, you can go to the next step.

Step 4: You may pay the franchise package in cash, cheque or credit card. If you are from outside Metro Manila, there is an option to deposit your payment directly to the bank through the following banks.

Step 5: Once you are done with the payment, submit a valid ID along with your signed franchise agreement.

Step 6: Attend the franchise business seminar and subject yourself and your staff to the given crew training.

Step 8:  Prepare yourself because you are now an entrepreneur. The operation of your very own food cart business begins.

Set up an Appointment!


3 responses to “How to Franchise: Emperor’s Siomai Food Cart”

Next post
How to Franchise: Pinoy Pao Food Cart