As Filipinos, we all grew up with street food and palamig drinks that are sold from street vendors. The most popular reason for drinking beverages such as sago’t gulaman is for its ability to quench our thirst and refresh our bodies to fight the heat that the Philippines is known for.

Nowadays, while sago’t gulaman is still around, a new trend sprucing up shop around the country is making Filipinos fall in love again. We’re talking about milk tea, of course! Milk tea can be found in many cultures, taking the form of different beverages, which in turn may vary in terms of the ingredients used, preparation, and addition of other ingredients such as honey. It has been so popular that multi-national companies have responded to the market by creating their own version in the form of a instant milk tea powder.

Milk Tea is making waves in the Philippines and does not show any signs of stopping. Why not open up a milk tea franchise and start raking up the profits? 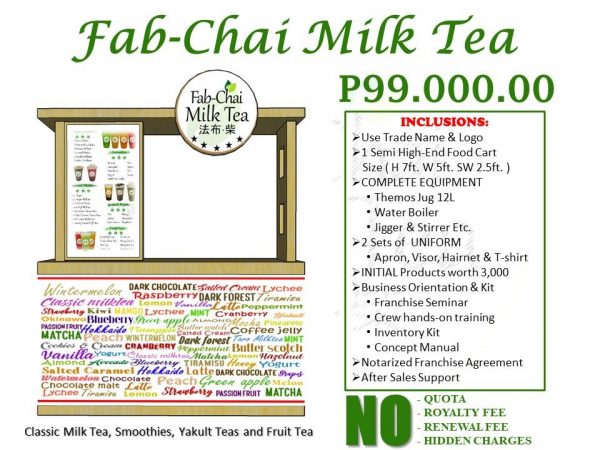 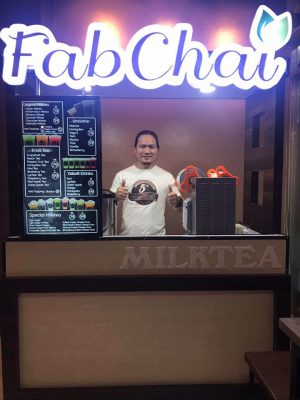 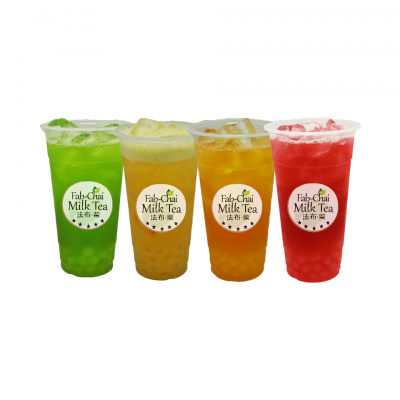 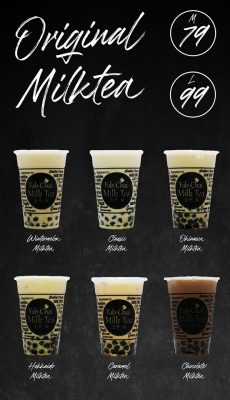 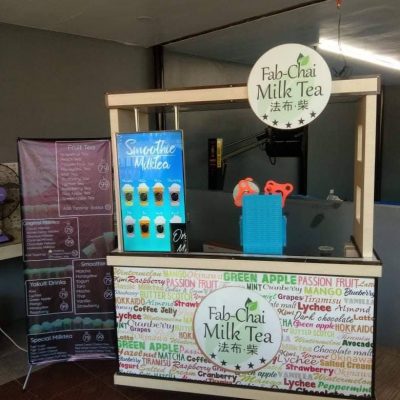 FaB Suffrage Inc. was established to help everyone to build their own business with quality and good services. The company promotes a tested and proven business system with an experienced management team by developing products and research facilities with a very high probability of success.

Vision: To be one of the Most Successful  Franchising business in the Philippines and empowering Filipino people with business knowledge and innovation to become a successful business owner.

Mission: To create more successful business partners, provide quality products and good services to our clients and consumer. And to help our society by providing more jobs in our economic system.

Some Comments on Fab-Chai Milk Tea’s Brand and Products

“I love milk tea! Fab-Chai’s flavors are so delicious and affordable, I keep coming back for more! Definitely worth the long wait on the line!”
– Ghia

“I am so obsessed with Milk Tea and when I found out a store opened near my residence, I was so ecstatic! I order my daily dose of milk tea from this Fab-Chai store near me whenever I can! Delicious!
-Rowena

“I am a businessman and I love milk tea franchises. Fab-Chai is my third (and probably not last) franchise and I have to say, the investment is so worth it!”
– Mike

What is Milk Tea and Why is it So Popular?

The most popular version of milk tea is bubble tea, which is also known as boba milk tea or pearl milk tea. Bubble tea is a tea-based drink invented in Taichung, Taiwan during the 1980s. Liu Han Chie, owner of Chun Shui Tang teahouse experimented with the usual cold milk tea by giving it some additional flavor and adding some candied yams, syrup, fruit, and of course, everyone’s favorite tapioca bubbles.

In the late 1990s, Filipinos used to tour around Taiwan, which of course resulted to the inspiration of creating a similar product in the Philippines years later. It is around this time that Zagu was starting to get popular and while it is not milk tea, the use of large “sago” balls used in their fruit drinks was just the beginning.

A decade ago, Serenitea opened its doors to the public as the first milk tea shop in the country. As Serenitea grew in popularity, so did other entrepreneurs who saw its potential pop up in the market. The classic Infinitea opened up to compete with Serenitea and their presence was not ignored by everyone.

Two years later, in 2011, Chatime finally opened up stores in Metro Manila, along side Gong Cha. At this point, milk tea shops aren’t just competing with each other, but with existing coffee shops (both big and small). It was only around 2017, that the popularity of milk tea grew rapidly and unexpected. Where previously milk tea was just seen as a pastime for getting a drink, almost everyone until now has had an obsession with the latest milk tea craze. Milk tea ice cream, milk tea with alcohol, milk tea as instant powder, taho mixed with milk tea, milk tea in a gallon, and even the coffee giant Starbucks making their own milk tea was a sign that the Philippines is officially obsessed with milk tea. Cut to 2019, the milk tea craze continues with Tiger Sugar and the implementation of a milk tea delivery service by food delivery companies. Sprouting out are other smaller and more affordable brands like Ochado or I Love Milk Tea franchise. We don’t know how long this trend will continue but so far it has been a good sign for investors to franchise one of their own!

Pro’s and Con’s of Starting a Milk Tea Franchise

Are you interested in franchising a popular milk tea business? Then it would be wise to know the pros and cons of starting a franchise. Just like any other form of venture, a milk tea business does not outright guarantee profitability as it takes into account other variables such as demand, business model, location, etc.

Effectively gauging whether or not starting one should be done by assessing the advantages and disadvantages you may encounter should you franchise. As such, here are multiple pros and cons of starting a milk tea franchise business.

After evaluating all possibilities, it may be time for you to think about whether or not if all of these factors are all worth pursuing a franchise.

Things to Remember When Starting a Milk Tea Business

A franchise is a method of expanding one’s business when it becomes clear that success can be sought after when you open up your business to others. Not only that, but it comes with the advantage of not having to micro manage all your franchise as they have their own respective manager. Franchising, therefore, is a good way of increasing your brand awareness.

When starting a franchise business of your own, you should be aware of the multiple factors that you should consider while you’re in the planning stage of implementation, such as:

All these factors should be considered when you’re starting a franchise business. Otherwise, you are doomed to fail. Having answered all the variables that determine your business’ future can greatly increase the chance of successfully implementing a good and well-established franchise business.

When it comes to franchising, there is no better time than now. Especially for milk tea, when the trend continues upwards with Filipinos craving to get their daily fix of milk tea. That goes without saying that franchising should be taken with pre-caution so as to be aware of what you’re getting into.

With something as volatile as milk tea, we don’t know how long the popularity will continue. Will it last as long as the eternal coffee? If the popularity does dwindle, will the business be able to sustain itself? These are just the many questions you should take into consideration.

Talking to your franchise consultant should be a priority in your checklist. Consultation is the first step in bringing your future to franchising a reality. Here are five questions to ask when you are starting a milk tea franchise business.

How long does it take to get up and running?

Not all businesses are the same. They operate on a different level depending on their size, business model, and capital. Most of the time, the usual operation starts between 30 to 60 days from the moment both parties are in agreement.

Before any of that, however, the company may require you to attend multiple training seminars to determine your ability to manage the franchise business.

What is the current performance financial-wise of the company?

Don’t worry, you don’t have to be an accountant to know how to check the financial condition of the business. At best you should at least check an 3 to 5 year overview of their finances to get a better understanding of how well (or poor) they have been previously performing.

What is the Mission and Vision of the company?

As entrepreneurs, we want our interests to align with the company’s values and principals. Otherwise, we might find ourselves in a predicament where we disagree with how the company runs the business. This should be a priority as well because it makes the individual more invested and committed with the business.

How do you become a qualified franchisor for the business?

A basic question that is able to provide you the capability of the business alongside its background and credentials. As an applicant, this gives you an insight on the process of the application for franchising and how they treat potential investors as business partners.

How long is the franchise term and the termination clause?

Given how volatile the milk tea craze and its unknown future, having a concrete time of operation and the ability to terminate at will is an important aspect for any business that is popular at the moment.

At best, they should provide you a somewhat reasonable time frame and option to terminate provided that you render your agreed terms.

These questions should be prioritize as it can give you an analysis of how the business sees franchisors as not just money leeches but a potential investor of the business for further growth expansion.

Next post
Aice Ice Cream Franchise: Details on How You Can Start