How to Franchise David’s Salon Outlet in the Philippines?

Salons are everyone’s to go-to whenever they are in need of a stress reliever, or when they simply want to pamper themselves and engage into a makeover. Also there are also a lot of instances wherein customers simply want a haircut – since everyone knows how fast hair grows, a good trim is recommended every once in a while to maintain the hairstyle.

The above mentioned reason as the main contributing factors as to why salon businesses are skyrocketing, regardless of what season it may be. Business-minded individuals learned about this opportunity, it is the explanation as to why they decided to go out there and create their own brand name and reputation – which most businesses succeeded.

If you’ll go out there, you’ll see that there are a lot of beauty salons here and there, as a proof of how prosperous the industry is.

One of the most successful businesses in this field is David’s Salon. 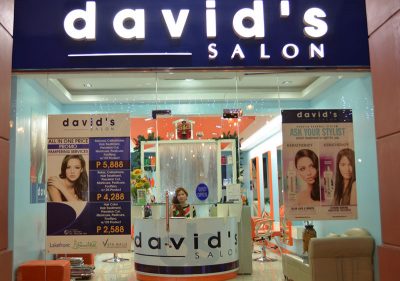 The man behind the thriving business is David Charlton.

Charlton began his journey as a hairdresser back in the UK, when he was at the age of 16. He got a job in his relative’s salon, and went to Durham Technical College – where he was able to pass with distinction. After he finished studies, he worked at the South Shields College as a hair dressing instructor. He was able to participate and conduct a number of workshops and seminar, which had been the key for having a broad knowledge about hairdressing.

In the late ‘70s, he went to the Philippines to manage a business named, ‘Rever Salon’ which was situated in the Mandarin Oriental Hotel. Due to his skill, he became a partner and evolved as the sole proprietor after some time.

His salon was a success, which gave him the confidence to expand his business and add more branches in different locations.

In 1989, he thought that the country is a bit lacking when it comes to a salon that provides high customer satisfaction which was offered at reasonable prices. Charlton decided to establish the first David’s Salon in Farmer’s Market, located in Quezon City.

A few years after, Charlton decided to team up with his other friends, who are businessmen as well, and worked in partnership and opened a whooping 13 branches more.

Due to its success, David’s Salon became more popular and unbeatable, and opened more and more branches all over the Philippines tremendous.

In the present, David’s Salon has more than 100 operating branches which are both company owned and franchised. David’s Salon became a corporation, consisting of an in-house training facility, accounting department, personnel department, purchasing and overall management departments. Each division is controlled by someone who has been working for Charlton over the years.

Advantages of Starting a David’s Salon Franchise in the Philippines

David’s Salon had become one of the biggest salon chains in the country, which still whole-heartedly welcomes interested franchisees.

However, the company prefers business-minded individuals who are hardworking, possesses passion and interest in the hairdressing industry, driven to succeed.

For those who are interested, a specific location must be presented, which is subject to the approval of the company. The desired location must be highly accessible and easy to be found to have better opportunities. Also, the minimum space requirement must be 70 square meters – which can accommodate 10 working stations, a facial room, a stock room, and a staff room.

Moreover, David’s Salon possesses the authority to decide regarding the interior, products to be used for every transaction, services to be offered to the public, and any kind of advertisements.

The price is a bit high, but the brand name and the business itself is worth every penny and can ensure an ROI in time. Furthermore, training programs will be provided for the franchisee, salon managers, stock clerks, and hairstylist.

For entrepreneurs who are looking for a new business opportunity which can generate a fair amount of profit, David’s Salon welcomes investors who can reach out to the company through following contact information:

To learn more about the David’s Salon Franchise, contact them below:


4 responses to “How to Franchise David’s Salon Outlet in the Philippines?”

Previous post
What are the Taxes a Small Business Needs To Pay? Info Plus Forms And Deadlines.