How to Franchise a Tony and Jackey Salon Outlet?

Hair is considered as a person’s crowning glory. When someone owns a well-managed hair, it contributes to the factors that give them a great impression to a professional and to the general public as well. The same reason is one of the main aspects as to why people spend money and their time acquiring hair treatments in different salons.

Not to mention that most people also reach out to their favorite stylists whenever they have important events such as birthdays, awards night, graduation, prom, and the likes.

For this reason, a lot of entrepreneurs enter into salon franchising due to the high demand – and one of the most renowned hair salon is Tony and Jackey. 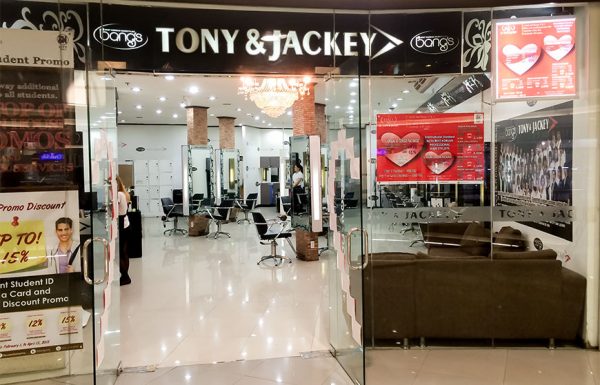 Company Background: How Bang’s Tony and Jackey Started in the Philippines

“Bangs Tony & Jackey Salon” was first instituted in the year 2001, and aims to provide for hairstyles similar to those of Koreans just like how it is in the foreign land.

The company’s name was inspired from the pioneer stylists namely: Tony and Jackey – who are both Koreans. Even back in the day, a lot of customers dream to have their hair fixed by the two foreigners as they were popular for their exquisite service and eye for styling.

The start-up branch was put up in Remedios Street corner Guerrero Street Malate, Manila. The company was ascertained as a small salon during their humble beginnings. They can only accommodate five customers at a time, and has a single shampoo station. However, despite of the salon’s size, it didn’t become a negative factor for the customers as they know that they will be provided with a world-class service by the stylists. Moreover, their loyal patrons were also thrilled with the price of each hair treatment services – which are truly reasonable. To add it up, they also provide great accommodation which made the salon a favorite.

Due to the salon’s success, the delighted sole proprietor decided to make another step forward by putting up another branch in a different location. After a thorough planning, the company finally transformed into a corporation under Security Exchange Commission (SEC) ten years ago — January 31, 2006.

The company was at their peak and opened three additional branches in Manila and another one in the Southern part of Cebu – and later on had branches all over the country.


One response to “How to Franchise a Tony and Jackey Salon Outlet?”

Next post
What are the Taxes a Small Business Needs To Pay? Info Plus Forms And Deadlines.