Silog is derived from the two words ‘Sinangag’ and ‘Itlog’, together with a third piece, the silog can become a ‘Tapsilog (tapa); Tosilog (Tocino); Longsilog (Longanisa), then, there’s Rita Peñaflor’s specialty of Bacsilog- a combination of rice, egg, bacon, melted cheese, and liquid savory.

Ate Rica’s Bacsilog, are housed within on-the-go cups, suitable to the food cart business with no private chairs and tables to accommodate customers to sit and eat. Franchisees also benefit from Bacsilog’s food container, by giving them the capacity to scale down the required location, making it easier to find a site.

The Establishment of Ate Rica’s Bacsilog 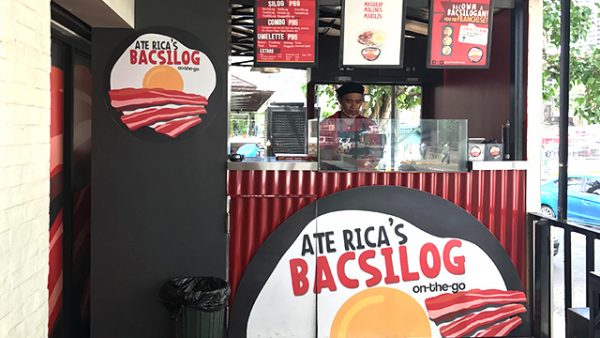 Ate Rica’s Bacsilog started in 2006 at Agno street which is also known as the “Hepa Lane”; a link connecting De La Salle University’s (DLSU) two buildings, providing Rica a strategic location where students naturally flock into when looking for snacks and meal in between their break.

Rica saw the potential to her business and immediately grabbed the opportunity when Agno street opened a commercial area in 2008, wherein she established her business as an official food stall with the trade name Ate Rica’s Bacsilogan.

A few years later, Rica’s business attracted interested franchisees giving her the idea of expanding as a franchise. Rica inquired the procedures involved in franchising with Dino de Leon-former law student of DLSU and a regular customer of the Bacsilogan.

As the two establish rapport, Rica offered Dino to become her business partner, Dino took her offer and became one of Rica’s partners in establishing the Baconnoisseur Corp., which handles the franchising of business. 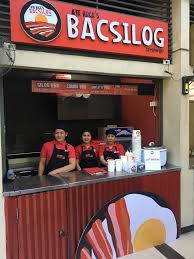 The thirty-eight existing franchises of Bacsilog have at least two-square-meter of an area and are frequently stationed within the schools, commercial areas, and other populous areas to provide ample potential customers.

Ate Rica’s Bacsilogan franchise package is inclusive of the following items and services:

As a food stall fully furnished with equipment and additional 12,000 worth of initial stocks, the price tag of Ate Rica’s Bacsilog at 450,000 is an affordable choice compared to the majority of food franchises. The mobility of the packaging eliminates of providing extra space for tables, which cuts down space requirement and site rent.

While food-related business yields a constant flow of consumers, keeping a good relationship with customers and smart market choices are still required to thrive within the industry, specifically with the rampant number of business, providing the same menu as Bacsilog.